Boasting high HP and strength, this sinister Heartless boosts its stats even further and lowers those of opponents to gain an edge in battle.

One of the many forms the heart takes after being swallowed by darkness.It uses strange movements to make fun of the enemy and bites it.

Heartless born purely out of darkness. Their movements are unpredictable, as they often make sudden moves and attacks.

A Heartless made from the very shadows of darkness.

The Darkball mostly just bobs through the air, but its random weaving and biting are a nuisance.

Heartless hewn from the very shadows. Usually they just waft through the air, but they can be annoyingly unpredictable, bobbing around erratically or charging right at you without a moment's warning.
Circus Balloon

The Darkball is a Pureblood Heartless that appears throughout the Kingdom Hearts series.

A Darkball Heartless, true to its name, has a spherical body that is pitch black and streaked with dark blue. Its glowing, yellow eyes are rather small. The inside of its mouth is blue, and the mouth itself is a jagged, toothy opening. It has three thick, black and blue tentacles with frayed, pink tips sprouting out of its body, two on its top and one on its underside. It closely resembles the Shadow Stalker of Kingdom Hearts II, although the Shadow Stalker has an overall smoother appearance and several smaller appendages.

The Darkball's name reflects its spherical shape and its status as a Heartless, a heart corrupted by the Darkness.

Darkballs are relatively easy enemies, and generally do little damage, thanks to the long pauses and low HP of this variety of Heartless. The Darkball teleports from one place to another, using a tactic similar to the more intelligent Invisible. 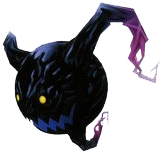