The original Baymax. He was retrieved from another dimension in a mantle of Darkubes, his program chip loaded with data from the hearts of the people the Darkubes attacked.
Dark Baymax serves as a boss in Kingdom Hearts III and is the original Baymax designed by Tadashi Hamada. He was lost in a void sometime prior to Sora coming to San Fransokyo. Dark Baymax is the result of Dark Riku and the Darkubes imbuing negative feelings into him and ultimately corrupting his combat chip.

Dark Baymax wears a fuchsia and purple armor similar to that of the other Baymax, except his wings are feathered and he has a full mask over his helmet. He is covered in bits of the Darkrube and, as a result of his corruption, has glowing red eyes.

Dark Baymax was created as a result from an experiment conducted by Dark Riku for Real Organization XIII to see if a heart can be created from data. Dark Riku takes the combat chip from the original Baymax as well as the darktubes and uses them to corrupt Baymax into Dark Baymax to forge a hear using the despair and terror from the citizens of San Fransokyo. Later, Hiro manages to find out the chip but before he can grab it but Dark Riku snatched it from him stating he wont be getting it back until Dark Riku is finished with his experiment, Hiro attempts to attack Dark Riku but he easily evades his attack. after discussing his past as being possessed by Ansem, Dark Riku taunts Hiro prompting him to question where Dark Riku had acquired it but he ignores his pleas and falsely promises Hiro he will put it back to where he found the chip.

The next day, Dark Riku, having determined that the combat chip contained the data that he needs, Dark Riku uses the leftover Darkubes to summon the original Baymax to fuse into a copy of data armor thus creating Dark Baymax. Sora was prepared to fight him but Hiro states that it is the real Baymax. Dark Riku then taunts Hiro and Sora telling them calling Dark Baymax a "puppet that wont wake up" since he lost his "heart". Hiro pleas to Dark Riku stating Baymax is not a puppet but is family to him and begs Dark Riku to give him the dark chip but Dark Riku sadistically refuses to do so and instead put the dark chip into Dark Baymax, powering him up into a ruthless fighting machine. After this Dark Riku states there is one piece missing, Dark Riku states that Sora is going complete his heart. Although Sora refuses to do so, Dark Riku points out Sora is going to destroy Baymax right in front of him before dissapearing. After this Dark Baymax charges at Hiro but with the combined efforts of Donald, Goofy, Big Hiro 6 and Baymax 2.0, Dark Baymax is knocked towards the side. Reluctantly, Hiro having mentioned that Tadashi Hamada, Hiro's older brother, wouldn't want a Baymax the goes around hurting people. He tells Sora to fight Dark Baymax. Sora and Baymax 2.0 then take their leave fighting Dark Baymax through San Fransokyo.

After Sora manages to defeat Dark Baymax and purifies the darkness inside of him, Hiro contemplates destroying Dark Baymax's infected chip that was his combat powered chip but fortunately Big Hero 6 still has the resources to turn the original Baymax back into himself again and now having two Baymaxes by their side.

Dark Baymax has all the same abilities as the regular Baymax. 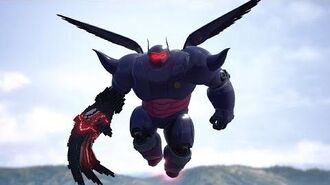 Although the character Baymax originates from the 2014 Disney animated film Big Hero 6, Dark Baymax does not appear in the film and is canon to this universe only.