A weapon that draws forth its wielder's personality.

Dainty Bellflowers (優雅なるスズラン, Yūga-naru Suzuran?, lit. "Dainty Lilies-of-the-Valley") is a Scythe that can be wielded by Marluxia in Kingdom Hearts 358/2 Days. It represents Marluxia's personality.

The Dainty Bellflowers, true to its name, is shaped like an enormous bellflower plant. Its handle, which is relatively short when compared to those of Marluxia’s other scythes, is the curved stem of the plant. The stem bends and curves downward to form the blade. The outer edges of the blade is lined by several short “leaves”, while the under edge sports three hanging, white bellflowers. With the exception of the bellflowers on the blade, the entire Scythe is colored in shades of green. When swung, the weapon makes a bell noise. If an enemy is hit, small white flowers appear.

The Dainty Bellflowers bears a resemblance to a treasure spot in Wonderland in Kingdom Hearts Re:Chain of Memories.

"Bellflower" can refer to several plants, such as the "lily-of-the-valley", named for their distinctive shape. "Dainty" means "delicate" and "pretty".

Dainty Bellflowers's ground combo starts off with Marluxia jumping into the air with an upward angled slash of the Scythe. Then he tosses it vertically into the air and allows it to spin a few times before it returns to his hand, which he then repeats. Marluxia then swings Dainty Bellflowers in a full circle for the finisher.

Its aerial combo is rather simple: it consists of an angled wide slash, followed by two more slashes, angled downward in front of Marluxia which forces him down, the latter of which serves as the finisher. 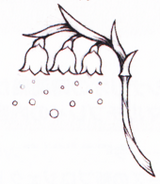 Artwork of the Dainty Bellflowers from the Kingdom Hearts 358/2 Days Ultimania
Add a photo to this gallery
Marluxia's Scythes
Retrieved from "https://kingdomhearts.fandom.com/wiki/Dainty_Bellflowers?oldid=788682"
Community content is available under CC-BY-SA unless otherwise noted.