Inflicts sleep on its enemies. Defeat it quickly before it makes a sitting duck out of you!

It's a bothersome foe that can honk and call other Heartless.

These small Heartless cause the most trouble when they toot their horns to heal themselves and their cohorts. The wind missiles they shoot can be returned with a block.

TIP: Wind-based attacks can air-toss you. While airborne you become an easy target and will take more damage if hit.

It restores the HP of surrounding enemies. Use Heal Stomp with the right timing to heal the party.

When attacked, it may call for help, so be sure to defeat it immediately.
Flare Note
Bubble Beat
Rainy Loudmouth

Based on the design of an old-fashioned vehicle horn, the round, black body of the Crescendo resembles a squeeze bulb, while its golden mouth resembles the bell of an instrumental horn. The Heartless's black head and antenna resembles a musical note, notably a quaver or an eighth note. A red collar separates the head and body. Two yellow eyes can be seen on its face, and it seems to be wearing earmuffs on its head, which are light and dark blue in color. The Heartless emblem can be seen clearly on the front of its body.

The colors of the Crescendo become brighter in Kingdom Hearts II Final Mix. Its body and head are now blue, the mouth-bell is now red, the collar is now a light blue, and the earmuffs are yellow and orange in color.

Musically, a crescendo is a gradual increase in volume.

These Heartless can be both a pain and a gain. They have little strength, but their sounds can call in reinforcements. Their sounds can also heal nearby Heartless, but by using the Reaction Command, Heal Stomp, the Crescendo's healing sounds are directed towards Sora and friends instead. Just pummel them with physical attacks and it will soon fall. 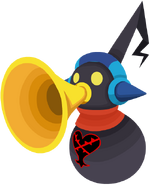