View source
watch 02:56
Raise a Floppa - The Loop
Do you like this video?
Play Sound
Article incomplete
This article is incomplete. You can help the Kingdom Hearts Wiki by adding Mirage Arena stats..

Even Unversed need somebody to boss them around. The Chrono Twister is happy to do the job. CTs like to hide inside their hour-glasses, but when the sand runs out and reveals their true form, woe is you! They're going to hit you with Stopga. You don't want that. Use combos to flip that hourglass before the sand runs out.
The Chrono Twister is an Unversed that is found in Kingdom Hearts Birth by Sleep and Kingdom Hearts Birth by Sleep Final Mix.

A Chrono Twister is shaped like a large hour glass. Its bases are black with green highlights. One base sports a single, black spike, while the other sports three spikes. It has two black handles resembling small wings near its middle. The main glass is translucent and half-filled with what seems to be yellow sand. The Chrono Twister's small, spherical, black head is inside the glass and tumbles around with the sand. Its red eyes can be viewed as having a happy or a sorrowful expression, depending on the way the head is turned.

In Kingdom Hearts Birth by Sleep Final Mix, Chrono Twister receive a recoloration, its base is now an aqua blue color with yellowish-green highlight, the handles are now aqua blue, the sand is now a pinkish-purple color.

A Chrono Twister, while weak on its own, can be a tad troublesome when grouped with other, stronger Unversed. Its main attack is casting Stop on the player. If the spell is cast, the player must spin the analog stick to free themselves. Any damage received while under the spell will be accumulated and inflicted when the spell ends.

Its secondary attack is to conjure several orbs of dark energy around the player that smash into the player after a few seconds. Once the orbs hit the player, a large energy orb is created over the player's head. It can also teleport to avoid damage. Magnet magic is good if attacked by a group. 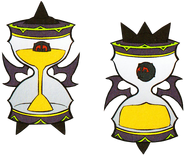