View source
watch 02:59
Wiki Targeted (Games)
Do you like this video?
Play Sound

Don't be sad. When you're sad, it makes me sad too. After all, we're friends, right?"

The Chirithy (チリシィ, Chirishī?) are a species of Dream Eater which first appear in Kingdom Hearts χ. They are the creations of the Master of Masters, and act throughout the game as a companion and guide to the player. The Chirithy are responsible for advising and assisting the player, enabling them to become stronger Keyblade wielders. While the Chirithy are present to offer advice to the player, they do not dictate the latter's actions and are content to allow the player to do as they please. The Chirithy are, however, bound to their respective players, and as a consequence will succumb to the darkness or disappear if their player travels down either path.

Whilst being bound to the player, the Chirithy do not claim allegiance to a particular Union, but rather assist the Foretellers in purging the world of darkness.

Each Chirithy possesses a unique personality. This is evident from the Chirithy's interaction with other Chirithy. Despite being unique, however, each Chirithy directly addresses other Chirithy as "Chirithy". This uniqueness is further emphasised by the player's Chirithy possessing a sense of humor. It attempts to make jokes at times, though the success of these varies somewhat.

Besides interacting with their respective Keyblade wielders, as well as occasionally with others, the Chirithy do not generally strike up friendships with others. The player's Chirithy becomes an exception to this when it acknowledges the player's words by echoing them back to them, solidifying their friendship.

The Chirithy's appearance varies depending on whether it resides in its Spirit or Nightmare form, though the general shape of the Dream Eater remains consistent—that of a cat-like creature with a large, rounded head; drooping ears, and a smaller body and tail. Spirit Chirithy are gray-colored, with black stripes appearing at regular intervals across the body. Spirit Chirithy each have blue eyes and a peach-colored nose, in addition to black ears. The area surrounding the nose is colored white, as is a strip of flesh down the front of the Chirithy's body. A pink and gold purse decorated with the Lux emblem hangs from the Chirithy's neck at all times. To identify it as a Spirit Dream Eater, the Spirit emblem exists on the Chirithy's back, hidden by a yellow and pale blue cape.

Nightmare Chirithy, in contrast, are purple-colored, though retain the same black stripes across the body. The ears are a bright shade of pink, whilst the eyes are circular with the characteristic red of a Nightmare Dream Eater. The same lighter-shaded area of flesh runs down the front of the body, but is slightly yellower. This form of Chirithy also wears a cape, but it is colored in different shades of pink. A green and inky black purse hangs from the neck by a chain, completing the darker look.

The player's Chirithy first appears in Daybreak Town, alongside an unknown Foreteller.

Chirithy appears before Sora in The Final World. She explains that Sora had perished, but that something was preventing him from moving on. She tasks him with finding the pieces of himself. After Sora completes himself, Chirithy encourages Sora to use the Power of Waking to return to the real world. Sora suggests that Chirithy find her own pieces, to which Chirithy tells him she doesn't work the same way, and that she is waiting for somebody - though she laments that the person doesn't remember the past. Sora bids goodbye to Chirithy as he departs, promising to visit her again and calling her his friend.

Later, after Kairi was crystallized by Master Xehanort, Sora asks Chirithy to help him recover her. Chirithy is shocked and shows concern for Sora, but realizes she cannot stop Sora from trying. Chirithy tells Sora what he needs to do to be successful and wishes him well. After Sora successfully revives Kairi, Sora returns to The Final World. Chirithy hid his presence as to give the two some privacy. Chirithy is then surprised and overwhelmed with emotion when Sora and Kairi ask her to come visit Ventus in person.

Chirithy later appears in the Land of Departure after the defeat of Master Xehanort, where she is reunited with Ventus.

The Chirithy are able to disappear into thin air in a puff of smoke whenever necessary. Despite being the player's companion, the Chirithy are free to move about as they please. 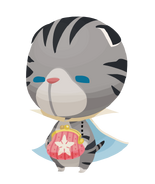