Beauty and the Beast

This cup is often with his mother, and takes on the same, cheerful attitude his mother has. He is eager and curious, and likes to search for new, spectacular things. He has a very positive personality, but is also a bit too childish, and gets into a lot of trouble.

Chip is changed into a small, white teacup by the curse, and his rim sports a small chip in its right side—thus his name, Chip—that was apparently a missing front tooth in his human form. Both his rim and his handle—representing his nose—are gold. His base is purple with gold lining and an alternating pale blue and pale pink pattern on it. He also has blue eyes and arching black eyebrows.

Upon Sora's return, the Beast and Belle were having a party when Xaldin reappeared and took the Beast's enchanted rose. All that Chip could do was to observe the victory.

After the events of Kingdom Hearts II, Chip returned to his human form, just as everyone else in the castle did.

Chip first appeared in Walt Disney's Academy Award-winning film, Beauty and the Beast. Chip is the son of Mrs. Potts and was turned into a household object -a teacup- as the result of the curse placed upon Beast's Castle and all its inhabitants.

In the film Chip befriended Belle during her time in Beast's Castle and he helped her and her father escape when they were captured by the antagonist of the film, Gaston. After the curse was lifted, Chip reverted to his human form of a young boy. 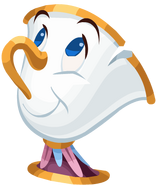