This creature not only has lots of HP, but you can also boost its defense! You won't be able to burn it down quickly, so prepare for a long battle!

This icy knight Heartless's skillful defense makes it tough to finish off. Though its focused slash can be stopped with a block, blasting the knight with Firaga while it is storing up energy will stagger it, opening it up to extra damage, especially from magic.
Zip Slasher
Dual Blade
Heat Saber
Blitz Spear
Stalwart Blade
Dual Durandal

A Chill Ripper is a large, humanoid Heartless covered from head to toe in silver and grey armor. The armor on its legs sport white spikes and steel blue highlights. Its helmet sports two short, white spikes and a long, twisted, black antenna. A small opening in the front just barely exposes the Chill Ripper's black face and glowing yellow eyes. Its most notable features are the jagged, light blue, ice blades in place of each of its hands. It has two Heartless emblems, one on each of its shoulder pauldrons.

The battle with the Chill Ripper is no easy feat. While you don't have to take care of Xigbar, who will heal and perform attacks himself, it is important to watch Roxas's HP, or he may very well end up dying. In battle, this Heartless utilizes two attacks. One is a lunging spin attack which deals heavy ice damage, the other causes pillars of ice to erupt from the ground. Both of these attacks are easily avoidable with a Dodge Roll or Glide, but you should you choose to keep your distance.

The Chill Ripper possesses a charging lunge attack, which when parried stuns the Heartless. However, striking it with Firaga while it charges will also knock it down, and it is also extremely susceptible to Firaga whilst stunned. While you should attack whenever possible, the Chill Ripper is agile, and will jump around the field to avoid you.

It is important that the player heals regularly and utilizes the Limit Break should Roxas's HP hit the "alarm zone." If this strategy is followed, then they should have no trouble dealing with this boss. 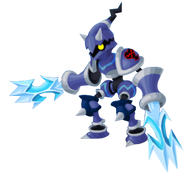