Carpet is a character who appears throughout the Kingdom Hearts series. He serves mainly as transportation in Agrabah.

Carpet was very shy when it first met Aladdin but gradually grew braver. It is very helpful and loyal, and if Aladdin or one of his friends are in danger, Carpet will be there to help.

Carpet is an ornate Persian carpet with gold lining and tassels that it uses as "hands" and "feet". A second gold rectangle splits Carpet's designs into two sections. The outer section's background is han blue in color and covered in gold and navy blue disk-like patterns. Each corner sports a vaguely catfish shaped design with a gold outline and red center.

The inner section's background is also han blue with a swirling, amethyst-colored pattern surrounding a gold and red pattern in the center that vaguely resembles a flower. The corners of this section each bear a gold tiger with white eyes, black nostrils, and a red mouth, possibly representing the Cave of Wonders Guardian. At both widths of the inner border is a red flame pattern with a thin gold outline.

Carpet was trapped under a drawer when Sora, Donald, and Goofy went into Aladdin's house. Once they released him, Carpet led them to the desert, where Aladdin and Abu were found, trapped in quicksand and surrounded by Heartless. Carpet played an important role in helping Sora and the others to escape the Cave of Wonders, by being the means of exiting the collapsing cave.

After sealing Hollow Bastion, Sora can "talk" to him in Aladdin's house. Agreeing with the Carpet's request will take the party to the desert to face a powerful optional boss, Kurt Zisa. After defeating the massive Heartless, Carpet will take you back to Agrabah.

Carpet is a character residing in Agrabah during the events of the game who is always seen with Genie. At first, when Carpet sees Roxas, he believes the Nobody to be Sora. However, Genie does not see the similarity between the two, and dismisses Carpet's claim.

Carpet and Genie went off to travel the world a year ago, leaving Aladdin depressed because of the town's lack of excitement. Carpet and Genie later return to Agrabah separately during Sora's first visit.

When Sora returns the second time, Carpet serves as their ride through the Desert Ruins to hunt Jafar, and later to escape. After the defeat of Jafar, Carpet becomes part of Sora's mini-game in Agrabah's Desert Ruins.

During the ending credits, Carpet is last seen flying with Aladdin and Jasmine on his back, with Genie and Iago following close behind.

Carpet is originally from the 1992 Disney Movie Aladdin, where he is found inside the Cave of Wonders, similar to his appearance in the Kingdom Hearts series. 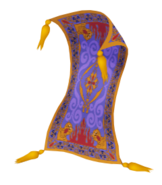