Buckles! Who knew? Sadly, they serve a purpose: keeping this Bruiser's sturdy armor strapped on. Head-on attacks won't work. You'll need to get behind it to hit its weak spot (try magic!) but don't get careless just because it's slow. Buckle rhymes with knuckle, which rhymes with pain, which you'll be seeing a lot if you're not ready to block.
Bruiser
Wild Bruiser
The Buckle Bruiser is an Unversed that is found in Kingdom Hearts Birth by Sleep and Kingdom Hearts Birth by Sleep Final Mix.

When Terra lands at Olympus Coliseum, he spots a Buckle Bruiser and some smaller Unversed attacking Hercules, and he drives them off. When Aqua arrives later on, a Buckle Bruiser attacks. Phil offers to protect her, but immediately runs away, leaving Aqua and Hercules to fight the Unversed off by themselves.

A Buckle Bruiser is a large, bottom-heavy creature with predominantly black skin, though it is almost entirely covered in predominantly blue armor. Its feet, which are covered in gold armor, curl up at the toes and its conical arms are protected by circular, blue and gold shields that it can throw. Its head is spherical, light grey, and covered by a blue helmet with a gladiator-esque, light grey crest and two grey spikes on its sides. The armor on the Buckle Bruiser's midsection is black with gold designs decorating it, and somewhat resembles a belt. Its red eyes are set in an angry expression and the Unversed symbol is emblazoned on the center of its belt.

In the journal, its description says: "Buckles! Who knew?" which is a reference to Tetsuya Nomura's habit of using belts and buckles for his character designs.

In Kingdom Hearts Birth by Sleep Final Mix, Buckle Bruiser receives a palette swap which gives it a red body armor with white highlight. Its two arm shields are now white and gold. Its head is now white.

Buckle Bruisers use the shields on their arms to deflect frontal attacks as well as for offensive purposes. It can throw its shields at opponents like a boomerang. It also attacks by body slamming and punching opponents. It can also retaliate with a lunge.

The Buckle Bruiser isn't a difficult enemy if you know where to attack. The shields on its arms deflect frontal attacks, and it can either punch players or toss the shields at them. The tactic to defeat one is similar to beating a Large Body or Fat Bandit: avoid its attacks and attack from behind. But be careful as it usually retaliates with a powerful lunge. 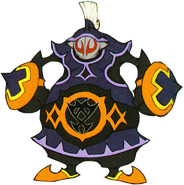