Medal Orb x 24
HP Orb x 12
Bomb Bell is a type of Nobody Ship that can be found on various Gummi Missions, and a monochrome version is encountered in the second battle with Xemnas and the World of Nothingness in Kingdom Hearts II and Kingdom Hearts II Final Mix. When they appear, they hover on screen for a few seconds, then close in before detonating. There are also glowing Red and Gold versions that drop treasures when defeated.

A basic Bomb Bell's main body is circular and resembles a classic alarm clock. it has three short, conical spikes on its sides—two near its base and one on its top—and has two mushroom-shaped protrusions on its top. It has two "arms" on either of its sides, and one long, thick "tail" attached to its base. Its face is navy blue and adorned with a white Nobody emblem, but the rest of the Bomb Bell is yellow with sky blue highlights. All of the spikes on its body are navy blue.

A version of this Nobody appears during the battle with Xemnas's dragon form that is colored in metallic shades of silver, white, and grey, and has a black Nobody emblem. This version of the Nobody is referred to as a Time Bomb. This Nobody is very similar in design to the Mystic Flyer.

The Bomb Bell's name references its explosive capabilities. "Bell" reflects its alarm clock-like shape. The name "Time Bomb" shares this meaning. Its Japanese name, Floating Mine, again refers to its ability to self-destruct.

The best strategy used to defeat this Nobody Ship is just to wait not long after it appears, for other Enemy Ships to come close. Once they are close, you shoot the Bomb Bell and it will explode, destroying most other Enemy Ships with it.

You have to be quick though, because they might explode before you get a chance to defeat it, so it will deal you a fair amount of damage. This strategy is most useful when battling waves of Gummi Ship Enemies. 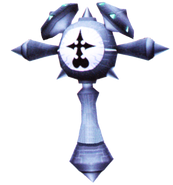 The Time Bomb as it appears during the boss battle with Xemnas
Community content is available under CC-BY-SA unless otherwise noted.