With tons of HP and paralyzing attacks, this armored adversary won't be easy to take down! Healing is imperative to make it through this long fight.

This lightning knight Heartless's skillful defense makes it tough to finish off. Though its focused slash can be stopped with a block, blasting the knight with Aeroga while it is storing up energy will stagger it, opening it up to extra damage, especially from magic.
Zip Slasher
Dual Blade
Heat Saber
Chill Ripper
Stalwart Blade
Dual Durandal

A Blitz Spear is a large, humanoid Heartless covered from head to toe in silver and grey armor. The armor on its legs sport white spikes and indigo highlights. Its helmet sports two short, white spikes and a long, twisted, black antenna.

A small opening in the front just barely exposes the Blitz Spear's black face and glowing yellow eyes. Its most notable features are the blades in place of each of its hands. These blades each consist of a black rod with a yellow, pointed tip, surrounded by two zig-zagging, yellow and orange rings. It has two Heartless emblems, one on each of its shoulder pauldrons.

The Blitz Spear can be a very annoying enemy, even if you are at a high level. Its shock wave attack does not only produce a shock wave, but also causes thunder bolts to come down from above, making it hard to avoid. Its focused slash can also be a bit of a pain.

While it is storing energy, if you touch the Blitz Spear, you will take damage. If you try to Block the slash while you are jolted, the slash will go right through you and the Blitz Spear will regain health. The best way to defeat it is to strike it with Aeroga to make it fall and stay on the ground longer, letting you attack it without retaliation. 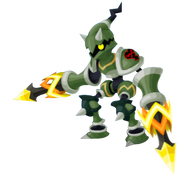