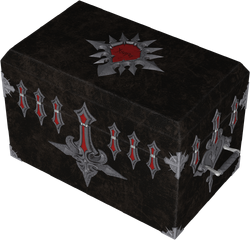 The Black Box is an item introduced in Kingdom Hearts χ Back Cover. Originally owned by the Master of Masters, that Box was entrusted to Luxu, who oversaw it for several centuries. Its exact content is unknown.

Maleficent and Pete are looking for this box.

Evil thinks it has been hidden since the fairy tale era, but no one knows where it is or what exactly it contains.

The Black Box is a large black chest, large enough for a single person to be unable to lift it off the ground. It has thirteen locks of silver and red color; three on the left side, three on the right side, and seven on the front. The central lock of the front is larger than the others.

On the top of the Box is an emblem with a silver outline and a red central part. The outline forms thirteen points outward, and seven inwards. The central part bears the inscription "χsuper" on it.

Originally, the Black Box is a mysterious chest owned by the Master of Masters. After asking his sixth apprentice - Luxu - to observe the events and the future through the Gazing Eye, the Master reveals the Black Box, adding that he must keep the Box hidden. When Luxu asks what the Box contains, the Master is content to answer that it is a secret and that Luxu shouldn't open it.

However, at the insistence of his pupil, the Master whispers in his ear the contents of the Box. The answer greatly surprises Luxu, who asks why. The Master just answers him that he would see in due time.

Subsequently, obeying his Master, Luxu disappears into the Badlands with the Gazing Eye and the Black Box.

After the Keyblade War, Luxu observed the conclusion of the events with the Gazing Eye. The Black Box is at his side, placed on the ground.

In accordance with the mission entrusted by his Master, Luxu hides the Black Box in an unknown place. Then, in order to fulfill his mission and cross the centuries, he transfers his receptacle heart into a receptacle until he becomes Braig, then Xigbar.

Throughout the ages, the existence of the Black Box eventually becomes almost unknown to all.

At one point, Maleficent meets an individual dressed in a black coat who speaks about the Black Box, suggesting that it contains a Book of Prophecies. Determined to find the Box and its contents, Maleficent enlists her second, Pete, to help her investigate different worlds.

Throughout Sora's quest to learn the power of waking, Maleficent and Pete search the various worlds he travels to in search of the Black Box for their own plans. Xigbar, wishing to recover the Black Box for his own agendas and to finish his role as Luxu, informs the real Organization XIII of the box, but never discloses its contents; to this end, Luxord is tasked with searching for the box.

After faking his elimination to Sora and Riku, Xigbar proceeds to retrieve the Black Box from an unknown location while the Keyblade War continued. Once Master Xehanort was defeated, his discarded Keyblade lands at the crossroads of the Keyblade Graveyard, where it is recovered by Xigbar, who now had the Black Box back at his side. Xigbar summons the Foretellers minus Ava, and reveals to them his status as Luxu's final vessel for his heart. Meanwhile in the distance, Maleficent and Pete observe the group, waiting for the right chance to recover the Black Box. 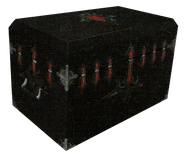