A berserker. A high-ranking Nobody. Its attacks are hard to read as it is dragged around by a cursed hammer.

Attacks from the front will only be parried by its hammer. Knock it down to make it let go of the hammer. Then pick up the hammer to unleash a flurry of attacks with Berserk.

Is the Nobody swinging the hammer, or the hammer swinging the Nobody? Reading its attacks can be tricky, but each blow hits like a truck, so steer clear of that hammer unless you're interested in air travel.

Oh, and if you see its body shrink and its hammer grow, a combo's coming your way. Think fast!

As Kairi and Naminé attempt to escape the Castle That Never Was, they are stopped by Saïx, who steps forth with two Berserkers behind him. Saïx tries to persuade Kairi and Naminé to stop trying to escape, but when they refuse he prepares to attack. However, Riku suddenly appears, and slashes one of the Berserkers in the back, effectively defeating it. The other Berserker seems to flee once Riku defeats the first one.

The Berserker has a well-muscled, bronze-colored upper body, with thin upper arms. Its forearms are mostly covered in large, cylindrical, silver gauntlets, while its blocky hands are black. Its waist and upper legs are silver, while its lower legs are cylindrical and grey. The silver and grey halves of its legs are separated by a steel blue knee brace. Its head is rather small, black, and cylindrical. It wears a silver helmet on its head, which also sports a small, steel blue diamond on its front.

A silver Nobody symbol is placed on its left pectoral muscle. It wields a large, bronze, T-shaped claymore with a long, black handle as a weapon. Like all other Nobodies, Berserkers have astounding levels of flexibility, and they also have the somewhat unique ability to shrink drastically in size.

The Berserker's name is based on the Final Fantasy job class of the same name. The word "berserker" is, in turn, derived from the Viking warriors called "berserkers", meaning "bear serk", the name of the clothing they wore. These Viking berserkers were infamous for fighting in a violent rage, recklessly charging at their enemies without armor or any other protection, and seemingly without concern for their own health.

The Berserker has very strong attacks and has an equally strong defense, making it one of the most powerful and time-consuming Nobodies not in Organization XIII. The Berserker appears in 2 different manners; first, the much more common way, is appearring without its claymore, though it shall quickly appear in front of it. If you are between a Berserker and its claymore, damage will be dealt, so attack at this time is risky. The second way is jumping down from mid-air, severely damaging and knocking back anything below it when it lands. Its attacks include mighty swings of its claymore that will knock Sora far from them. The Berserker will also often shrink itself down and hang onto its claymore before crashing down multiple times. This can be almost impossible to avoid, although using Quick Run is your best bet. A well timed Reflect also protects against this attack.

Moving in for a head-on attack can be risky, so the proper strategy is needed. First, attack with a combo; if successful, the Berserker should be separated from its claymore. Then grab the claymore and use the Reaction Commands Berserk, Eclipse, and Magna Storm. Continue this until the Berserker has been defeated. Using one claymore can also be used to defeat multiple Berserkers when using its Reaction Commands.

If in The World That Never Was, use Riku's Limit Eternal Session to finish the job. Another useful way to defeat Berserkers is to come in close, reflect its attacks with Reflect spells or the Guard ability, and then use its separated claymore's Reaction Commands. Using this tactic will greatly diminish the Berserker's health, as well as any other enemies that you capture with it.

Long-range magic is also very effective in combat with Berserkers. A good strategy of this kind would be to use Wisdom Form, for its MP-free, long-range attacks and accuracy. Its attacks can hit an attacking Berserker from afar, which takes away the risk of being parried and countered. When the Berserker begins attacks, dodging, getting afar, and using Trinity Limit is also very effective.

Alternatively, Thunder or Blizzard spells can be used at a distance to help preserve HP and deal large amounts of damage. A Magnet spell followed by a Limit or Thunder can be used to finish the battle or greatly weaken a group of Berserkers. 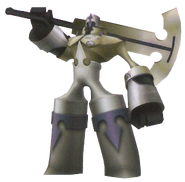