Story Quest
This beast boasts a mammoth amount of HP. Its paralyzing attacks make it a frightening foe; heal yourself with special attacks!

KINGDOM HEARTS (2002)
A slow but powerful Heartless that crushes its enemies and deflects most attacks.

Immensely powerful Heartless.
With their large frame, they trample enemies, and repel most attacks. Damaging their weak point makes them lose consciousness. Strike them with potent attacks while they are down.

A slow and lumbering Heartless—and be thankful for that, because the power at its command is tremendous. Be especially careful not to get trampled.
Destroyed Behemoth
Arch Behemoth
Hocus Pocus

A Behemoth is a massive, quadrupedal Heartless. Its body is predominantly lilac in color, but its back and all four of its legs are violet. Each of the Behemoth's legs have two toes with black claws. It has two large, curved tusks sprouting from its lower jaw that are white on their upper half and lilac on their lower half. The Behemoth's conical, black horn is on its forehead. Like most other Heartless, it has yellow eyes and a jagged maw. Its Heartless emblem is on its chest.

It is based on Behemoths from the Final Fantasy series; large purple monsters with two bull-like horns and a lion-like body.

Despite its menacing appearance, Behemoth can be defeated relatively easily, compared to many other bosses. Its only weakness is the small black horn on its head, which is more often than not out of Sora's reach while standing on the ground. The trick is to jump on to the thigh of one of its hind legs and then further on to its back (or just directly onto its back, if possible), and then simply run up to the back of the horn to avoid falling off due to Behemoth's head movements. From this position, one can attack freely, preferably using Ars Arcanum.

If Sora attacks the horn enough, the Behemoth will temporarily fall to the ground making it easier for the whole party to fight it. However, once it recovers consciousness, it will attack with a wide spread thunder like maneuver. Precise timing is needed to evade this attack at close range with Dodge Roll. Behemoth may also very occasionally leap from one place to another.

Blizzard, Thunder, and Fire magic doesn't affect it. Also, when the Behemoth charges up its energy ball rain attack (an orange ball will start glowing in between his horns) get under its back legs and stay there until the balls stop raining and then make a dash for the weak horn.

If Sora cannot make it to the Behemoth's horn, a possible alternate strategy is to use any form of Gravity magic. Since the Behemoth is slow, it will almost always be hit, and given its high HP, it will quickly lose a lot of HP. This also depletes Sora's MP quickly however.

Hollow Bastion, End of the World 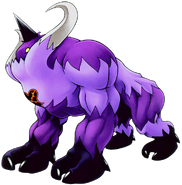