The number above this shielded sorcerer gets smaller with every Medal you use. Once it reaches 0, it'll boost its allies defense.

These mid-sized Heartless are accomplished mages. While not aggressive, they grant allies an impenetrable barrier.
Attack them until they get dizzy to make them drop their books, disabling any active barriers. The fallen books can then be knocked away.
They have high defense, but are vulnerable to magic. Exploit that fact.
Bookmaster
Runemaster

A Barrier Master is a rather small Heartless that wears long robes that cover its feet. These robes are predominantly indigo and navy blue, with a light green collar and a number of white designs decorating them. It also wears a tall, cylindrical, indigo and white hat and what seem to be light green gloves. The only part of the Heartless not covered by clothing is its face, which is spherical, navy blue, and sports yellow, glowing eyes. All Barrier Masters hold a dark blue book that they use as a shield.

The Barrier Master's name clearly references the magical shields it creates, and its skill in doing so.

The Barrier Master uses its large book as a shield, similar to the defensive methods used by the large-bodied Heartless. It can only be attacked when separated from the book, which is also used as a weapon with magical powers, the Heartless stunned upon this separation. It is also very weak to magic of any kind, so attacking it with magic will deal a great amount of damage.

However, it will soon "wake up" and will start moving towards its book. If it successfully reaches the book, it will once again use it as a shield. The book can be knocked away by attacking it, though. Also, if it is away from its book for a long time, the Barrier Master can summon a new book, which also has to be separated from it. 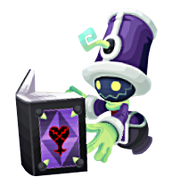