Article incomplete
This article is incomplete. You can help the Kingdom Hearts Wiki by adding Mirage Arena stats..

These baddies will launch razor-sharp gusts of wind at you faster than you can say, "Axe Flapper." Keep your distance and give yourself room to dodge! Beware: Just because you've taken one down doesn't mean you've taken it out. Get hasty and wander too close, and it will counter with a Rising Slash.

An Axe Flapper is a bat-like creature with a thin neck and a pear-shaped body. Its body is navy blue while its short legs and tail, as well as its head, are all blue. Its head is shaped like a hatchet or axe blade. Two large, tan wings with blue edges sprout from the sides of the Axe Flapper's head. It does not have arms. Its red eyes are set in a sorrowful expression and the Unversed insignia is displayed on the front of its torso.

In Kingdom Hearts Birth by Sleep Final Mix, Axe Flapper receives a palette swap which gives it a light-pink body.

An Axe Flapper will usually keep its distance from players and attack them with blasts of Aero from their wings. If knocked down, it recovers with a sudden spin which damages players.

An Axe Flapper is not a difficult enemy to defeat. If it uses its Aero blasts, Block, then counterattack to strike it down. An easier strategy is to use Magnet magic to stun them. 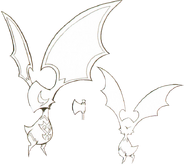 Concept Art
Add a photo to this gallery
Unversed
Retrieved from "https://kingdomhearts.fandom.com/wiki/Axe_Flapper?oldid=778333"
Community content is available under CC-BY-SA unless otherwise noted.