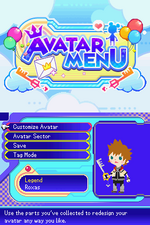 The Avatar Menu is a minigame in Kingdom Hearts Re:coded in which players make an avatar out of countless clothes and features. Collecting half of them earns a new trophy.

There are four options on the main menu. Customize Avatar: Use parts you've found to create your own avatar. Avatar Sector: Play System Sectors you've unlocked through tag mode. Save: Save your progress and changes to your avatar. Tag: Mode: Meet other avatars to obtain new parts. 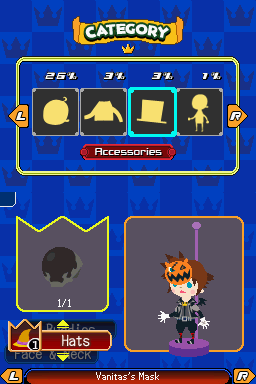 Balloon Letters can be given by a friend's avatar, a fixed avatar, or a random avatar. When the player receives a Balloon Letter from a friend who is also playing Kingdom Hearts Re:coded, the two players will share their personal avatars, and whichever Floor Codes and Floor Challenges they selected. If Tag Mode has been used for a suitably long interval, usually an hour or two, the player can also receive an avatar constructed from random Avatar Parts; this avatar's name and quote will reference each other, but not its appearance or any of its stats. More infrequently, a fixed avatar will appear in place of the random avatar.

If the player enters Tag Mode while receiving a DS-compatible wireless signal that is not from another Kingdom Hearts Re:coded game (for example, if it is receiving a broadcast from the Wii's Nintendo Channel, or from another DS's PictoChat), they will immediately receive a fixed avatar, whose quote and other stats are references to the character the avatar depicts. Balloon Letters received this way are generated by the compatible wireless signals; the more signals the DS is receiving, the more Balloon Letters will be received in the same amount of time. While the player can generally receive only one of each of the fifty fixed avatars, the random generator for the fixed avatars is based on the DS's internal clock, so if the DS receives multiple wireless signals and generates more than one Balloon Letter at the same time, it is possible to receive multiple Balloon Letters with the same avatar.

Scratch Cards are one of the prizes attached to Balloon Letters. Every Scratch Card is set in a specific world, as specified by the background, and contains several hidden icons depicting characters from that world. The cards also list a "Character Hunt" (キングダムスクラッチ, Kingudamu Sukuracchi?, lit. "Kingdom Scratch") that requires the player to uncover a set amount of a specific character within a set amount of chances, and almost always lists a "Bonus Hunt" (ボーナススクラッチ, Bōnasu Sukuracchi?, lit. "Bonus Scratch") as well, which requires the player to uncover a single, specific character; the exceptions are the character hunt on the "Villains Card", where the player must not uncover Chernabog, and the character hunt on the "Princess Card", where the player must uncover one and only one each of the seven Princesses of Heart. In addition, if the avatar has a Buddy part, the Bonus Hunt will be replaced by an "Avatar Hunt" (アバタースクラッチ, Abatā Sukuracchi?, lit. "Avatar Scratch"), which consists of uncovering the buddy's icon. Clearing a Character or Bonus Hunt will result in Data-Sora winning a random command or Avatar Part; the class of Command or Avatar Part is dependent on the Scratch Card type and which hunts are completed, and it is even possible for the Avatar Part to be one that Data-Sora already has.