Ava is a Keyblade Master who appears in Kingdom Hearts χ. She is a Foreteller and the leader of the Vulpes Union. She is also an apprentice of the Master of Masters and the founder of the Dandelions.

Ava is a kindhearted individual whose youth enables her to befriend the members of not only her Union, but others as well. Despite her young age, she is prudent and diligent, fulfilling the role the Master of Masters assigned to the letter, despite her own personal misgivings in regards to some of his teachings; when questioned on this, however, she is quick to assert that the Master is beyond reproach despite all evidence to the contrary. She is very forthcoming in most matters, able to tell Ephemer about her doubts as a Foreteller, and able to personally invite others to become members of the Dandelions. She also displays a more childish side, as she is openly infatuated by the Chirithy the Master presents to the Foretellers.

However, like Aced and Gula, her loyalty and faith towards the Master’s prophecy eventually wavers, she starts to question and doubt his actions throughout the story. Eventually, this leads to her decision to bend the rules and defy some of his orders. One such example of this can be seen with Brain, to whom she gave one of the copies of the Book of Prophecies despite not being supposed to do so in order to interfere with the Master’s ultimate plan. Befitting her Fox motif, Ava is clever, cunning and good at manipulating events from behind the scenes, which helped her a lot when she formed the Dandelions. In that regard, her and the Master are similar, to the point that Ava purposely goes behind his back and tries to sabotage the Master’s plans in a manner similar to how the Master sabotaged the Foretellers to set them up against one another. Also, despite her respect towards the Master of Masters, Ava doesn’t seem to share his fatalist beliefs and believes that the future can be changed for the better. This is the reason why she chose to give Brain one of the copies of the Book of Prophecies.

Just like the other Foretellers, Ava's face is partially hide by a silver fox-inspired mask with ears poking through the top of her hood. She dons pink foreteller garments including a light pink hooded cape with gold trims, lavender top over a off pink-white robe and a dark pink sash coming out the back of her cape. Like the other masters, small blue crystals adorn the edge of her edge.

She appears to be the youngest of the Foretellers as well as the shortest aside from Gula.

The Master of Masters assigns Ava her role.

When Luxu/Xigbar recalls the Foretellers after Master Xehanort's demise, Ava is not among them. Luxu explains Ava did not come because she fulfilled her role.

As one of the Foretellers, trained personally by The Master of Masters, Ava is an extremely powerful Keyblade Master. In addition to being certainly an impressive swordswoman, she is proficient in white magic and illusions, her style revolving around them, capable of healing severe wounds, saving Gula from the near-lethal injuries he suffered from losing to Aced and swiftly restoring the player's strength, and could trap others in illusions without them even realizing it, placing the player in an illusion where they confront a Foreteller. 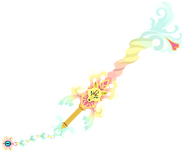