This is my story, and you're not part of it.

Auron is a character that appears in Kingdom Hearts II, originally from Final Fantasy X.

Auron is the strong, silent type. He speaks only if necessary, but when he does, he speaks words of wisdom. He appears as a strict, no-nonsense warrior with a dry wit. As a 'Guardian', Auron devotes his life to protecting those in need, putting the matters of others before his own without concern for his own well being.

His experiences from his mortal life have strengthened his spirit. A man of unshakable resolve and loyalty to those he protects with enlightening wisdom, Auron is seen by his peers as an excellent role model more than worthy of the Guardian role.

Auron greatly resembles his original, Final Fantasy X incarnation in his youth, though with a less complex outfit and without the "nog" bottle on his left hip. Auron wears a blood red haori with blue lining, kept closed with a thick, black and blue strap with two brown belts wrapped around it. Auron tucks his his left arm into the front of his haori, making it look as though his arm is in a sling. Though in Final Fantasy X he removes his arm from here several times, he never does so in Kingdom Hearts II. There is a brown shoulder pad on his left shoulder that is intricately decorated with tan, green, and blue patterns, as well as a beaded ornament that dangles from it.

He wears black pants and shoes, the latter of which have brown straps and triangular metal plating adorning them. Auron also wears a black shirt with a peculiar, grey collar with intersecting brown straps that is high enough to cover his mouth. His short hair is dark grey and spiked, and he seems to have some light stubble on his chin. There is a large scar over the right half of Auron's face and over his eye, which is constantly shut as a result. His left eye is amber colored. Auron wields his starting weapon from Final Fantasy X, the "Katana" (named "Battlefields of War" in Kingdom Hearts II), though it has more in common with the fictional zanbatou sword than a katana.

Auron's role is quite similar to that of Cloud's in Kingdom Hearts, in the sense that Hades sends them both to kill Hercules. Hades becomes increasingly frustrated in his attempts to defeat Hercules, since the hero defeats every opponent the Lord of the Dead throws at him. At Pete's suggestion that he "send somebody already dead and save him the trouble", Hades decides to bring out the "mother of all bad guys". He goes to the deepest dungeon in the Underworld and summons Auron, offering to let him out if he kills Hercules.

Auron declines and insults him, derisively telling him that "This is my story, and you're not part of it". Hades, in a rage, attacks him just as Sora comes in, and the group escapes, battling legions of Heartless and Cerberus along the way. On the way, Sora complements Auron's fighting skills and asks if he is a hero, though Auron denies being a hero. He asks Sora if he needs a guardian, but Sora politely declines. Soon after escaping Cerberus, Auron disappears.

Auron is revealed to be the final contestant in the Hades Cup by Hercules. When Sora attempted to talk to him Auron says that he must defeat them and atone for his crimes, this confuses the group enough to follow him. Sora and Donald then witness a conversation between Hades and Auron in which Hades asks his crime. In response Auron says it was because he existed. When Hades told Auron to not only defeat Hercules, but also get rid of "three meddling friends" (Sora, Donald, and Goofy), Auron refuses making Hades seal what remained of Auron's free will into a doll and forces him to fight Hercules in the Underworld Coliseum.

Sora enters the Underworld in search for the doll. Meanwhile, Auron came close to defeating Hercules, pinning him under Battlefields of War. However, moments after, Sora brings back the doll, restoring his free will. Auron then joined Sora and the party to help defeat Hades. Subsequently, he decided to travel the Underworld to write his own story, granting Sora the Guardian Soul Keyblade before leaving.

Auron is seen during the credits fading back into pyreflies (the essence of a person's soul in Final Fantasy X) after witnessing the restoration of the Olympus Coliseum.

Auron is naturally a physical character with a small handful of support abilities, including two to restore his MP. He attacks very quickly, leaping through the air to strike enemies, and his Limit Break is very powerful. Auron has one armor slot, no accessory slots, and two item slots. His abilities are as follows: 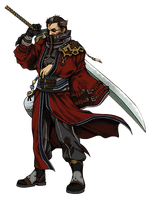 Auron was originally a playable character from Final Fantasy X. A wise monk shrouded in mystery, he acts as the Guardian of Yuna and a mentor towards Tidus. He was close to both of their fathers, the High Summoner, Braska, and fellow Guardian, Jecht, respectively.

Kingdom Hearts II Auron resembles his Final Fantasy X counterpart in many ways, though he appears younger, and many more references are made to his original incarnation than most other Final Fantasy characters. For example, the lines heard after Sora takes the Auron doll are lines Auron spoke to Braska and Jecht in Final Fantasy X, rerecorded for Kingdom Hearts II. He references his previous profession as a guardian of summoners. Auron also turns into pyreflies as he returns to the Underworld (a phenomenon occurring in/connected to Spira).

Oddly, Auron's line, "Thanks for meddling," is spoken in a similar manner by Jecht, also from Final Fantasy X, in Dissidia Final Fantasy, when Firion tells him Tidus is his true opponent.

Additionally, all of Auron's Limit commands are the names of his various Overdrives in Final Fantasy X, except for Spiral, which is based on Tornado, his final Overdrive.