When in a pinch, this Heartless throws caution and itself to the wind. Boost your defenses before taking on this formidable foe!

It charges its target in a group. Use the reaction command Rising Sun when it jumps into the sky, as it is about to unleash a tackling attack.
Use Rising Sun in succession for various combos!

An Armored Knight, true to its name, is a very thin, humanoid Heartless clad from head to toe in black, grey, and silver armor. Its spherical, pitch-black head and glowing, yellow eyes are visible in its helmet, and there are two red spirals decorating its visor. It also carries a sword with a gold guard and handle. Its Heartless emblem is on its abdomen.

The Armored Knight's name is a direct reference to its appearance, which is reminiscent of armor-clad knights.

They have very low HP, and their Reaction Command, Rising Sun, is very powerful. However, they do tend to swarm in large numbers. Use the Reaction Command to easily defeat them. 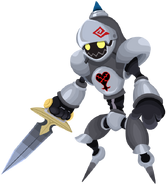