Ariel is the rebellious and strong-willed princess in the underwater kingdom of Atlantica. She appears as an ally, party member, and a summon/link throughout the Kingdom Hearts series. She is the daughter of King Triton and one of seven sisters. Ariel previously lived at the palace in Atlantica, but, as of Kingdom Hearts II, she has become human and married Prince Eric.

Ariel meets Sora, Donald, and Goofy as she, Sebastian, Flounder are swimming away from some Heartless. After Sora defeats the Heartless, she introduces herself and teaches Sora how to properly move around in the water. Ariel decides to help the three find Atlantica's Keyhole after hearing Goofy mention it offhandedly to her father. King Triton forbids his daughter from leaving the palace, but she gets angry and leaves anyway. Ariel follows Sora to help him find the crystal that has the power to reveal the Keyhole. King Triton arrives in time to destroy it, leaving Ariel in tears.

The sea witch Ursula then lures Ariel into helping her steal the Trident from King Triton, with the promise of helping Ariel get to other worlds, while also revealing that Sora, Donald, and Goofy are in fact from another world. However, things don't go as Ariel plans, as Ursula makes off with the Trident and injures her father. With Ariel's help, Sora, Donald and Goofy defeat Ursula.

After sealing the Keyhole, Sora apologizes to Ariel for lying to her, but she lets it slide, confident that, if they can find a way to travel to different worlds, so can she.

Ariel later appears as a memory of Sora, on Atlantica's floor in Castle Oblivion. She is first seen swimming towards Sora, Donald, and Goofy. She quickly informs them not to tell anyone that they saw her and swims off.

Afterwards, Sora and company find out she was running away because she stole her father's Trident to save Flounder from Ursula's clutches. Sora and his friends help Ariel confront Ursula and save Flounder. After Ursula's defeat Sebastian arrives and Ariel decides to face the consequences for taking the Trident.

A year later, Ariel saves Prince Eric from drowning and takes him to shore. There she sings to him until he wakes, fleeing back underwater once his eyes start to open.

Unable to forget about the prince, Ariel falls into deep depression, and so Sora and the others decide to help her. When her father finds out that she has fallen in love with a human, he tries to make her forget about him by destroying the statue of Erick that Flounder, Sora, Donald, and Goofy had given to her as a gift to cheer her up. But then Ursula appears and makes a deal with her: make her human for three days in exchange for her voice. In addition, she must make Eric kiss her willingly before sunset on the third day, otherwise Ursula will have Ariel imprisoned forever. Despite the hardship, she signs the contract and finally gets to meet Eric in person, although he does not recognize her at first.

On the third day, Sora and co. find Ariel sobbing on the beach. While trying to figure out what's wrong, they see another girl walking towards them with her arms wrapped around Erics. However, Eric looks dazed, as though he was hypnotized. The other girl sings to the prince with Ariel's voice. Flounder figures out that the girl is disguised as Ursula and Sora destroys the shell which contains Ariel's voice. Ariel regains her voice as Ursula transforms back into herself again, and she drags Ariel back into the sea. Sora, Donald, Goofy and Prince Eric battle Ursula.

Once Ursula is defeated, Ariel reveals to Eric that she is a mermaid and says goodbye to him, but this does not change his feelings about her. Seeing how much they are in love, King Triton's view of humans changes and he lets his daughter be with a human prince. Later, Ariel is disappointed to learn that Sora, Donald, and Goofy are leaving, but they refuse to say goodbye and assure her in song that they will meet again, to which she happily agrees.

Ariel is a bright, spirited mermaid that thinks and acts for herself, and doesn't do what others tell her what to do. She can be rebellious at times and act rashly to get what she wants, which often lands her in trouble with her father. She doesn't wait for things to happen to her and is proactive about her future. She has a big sense of adventure, always wanting to find something new even if it is dangerous. Her friend, Flounder, is often the voice of reason between the two of them, although she doesn't listen to him anyway.

Ariel has feelings of disenchantment as she longs for a new world, be it either the human world above or a new one altogether. But, she can also be somewhat gullible, twice falling for Ursula's manipulative skills, even in Kingdom Hearts II, which occurs after Ariel finds out of Ursula's deceptive and antagonistic nature. She is also protective of her friends, doing anything for their safety, as seen when she stole the Trident in Kingdom Hearts: Chain of Memories to save Flounder.

Ariel is a slender mermaid with very thin wrists and hourglass figure. She has a green tail with paler green, translucent fins and wears a brassiere made out of purple clams what it covers her breasts. She has bright blue eyes and full red lips. Her most defining feature is her long, cherry red hair that altogether is almost bigger than her entire body.

In Kingdom Hearts II, she is turned into a human for a short time with long slender legs. She is shown in an old sail with some rope keeping it closed when she is first changed into a human. After being taken in by Prince Eric, she wears a dress with light blue sleeves, a black bodice, and blue skirt. She also wears a big blue bow in her hair and black heels.

Ariel is one of the few caster-based party members in Kingdom Hearts, focusing largely on magical support through her Cure and Aero Potions, alongside the Thunder Potion for damage. She has no equipped weapon, but can attack by flipping vertically or horizontally and slapping enemies with her tail. She is not particularly helpful at this however, as her Strength and Defense are somewhat below average. Her HP is in the same category, although she does have a decent amount of MP.

Aside from her magical prowess she is also the only character with an actual active special attack; Spiral Wave. It is a spinning charge attack with a moderate amount of damage focused on one foe. Due to its speed enemies often cannot avoid it due to the difficulty of moving underwater, so it does have some use. Her Thunder Potion is rather weak however, so you can have more use out of the Cure and Aero variants.

Her additional abilities further build on her functionality as a magic user; she has two instances of MP Rage and one of MP Haste, which at least make it more beneficial for her to engage in melee combat. Lucky Strike and Second Wind are also convenient in general, as is Treasure Magnet especially due to the large amount of MP orbs that enemies like the Sea Neons drop. She is also one of the few characters with an accessory limit of three, alongside an item slot count of five, which can be helpful for boosting either her MP or her lower base stats.

when it flashes on-screen to add an attack. Pressing

when it isn't on-screen will cancel the sleight. It can be used with two or three Ariel cards.

Ariel appears as a Link in Kingdom Hearts III. When first summoned, Ariel creates a giant water cyclone around Sora where he holds her hands and she backflips over top of him. She then disappears into the ground and Sora follows. Pressing

, Ariel and Sora will take alternating turns reappearing from the floor to attack enemies. As they each appear, they can hit enemies in mid-air, drop massive bursts of water onto enemies from above, and land hits on enemies while going back down into the floor. When the summon nears its end, Ariel and Sora grab hands and start spinning around as fountains of water spray out of the ground hitting enemies.

Ariel is based on her respective character in Disney's 1989 film The Little Mermaid where she is the main protagonist of the film. The film is, in turn, based on a Danish fairytale of the same name by Hans Christian Andersen.

Ariel is loosely based on the unnamed protagonist of the tale. The premise remains much the same, a young mermaid princess obsessed with the human world which she is banned from seeing. But, it varies greatly in other aspects. She must marry in order to remain human, her prince treats her like dirt, she doesn't get the man, and ends up turning into a Daughter of the Air who has to do good deeds for 300 years in order to earn a soul and not turn into sea foam when she dies.

The storyline of Ariel stealing King Triton's Trident in Chain of Memories is taken from The Little Mermaid II: Return to the Sea, where Ariel's daughter, Melody, stole Triton's Trident (although for completely different reasons). 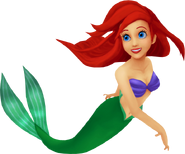 As a Link Summon