This massive Heartless swims freely through the sand. Aim for its face when it breaks the surface.
After sustaining damage, it will take to the sky, but its cyclone shield protects it from direct damage while airborne.
Instead, hit the debris it throws back at it to create an opening and then strike.

The Antlion is an Emblem Heartless who can be found exclusively as a boss in Kingdom Hearts 358/2 Days.

The Antlion is a massive, seemingly mechanical Heartless with a round, egg-shaped body comprised of several rotating rings. Each of these rings are white with black and yellow highlights, and each is lined by multiple, rectangular pillars. Most of these pillars are steel blue, though two on the first ring are a patchwork coloration of gold and copper. The Antlion's rear sports a grey turbine that it uses for locomotion. Its neck is black and gold, while its comparatively small head is roughly spherical and white. Its head sports glowing yellow eyes, a large, jagged mouth, and two short "horns". It also has two large, steel blue and gold mandibles on the sides of its head. Its Heartless emblem is between its eyes.

This Heartless often travels underground in the sand. It is best suggested that you attack it with the Fire Spell. Eventually, it will escape by diving into the ground, preparing its next form of attack. At this point, climb up onto one of the ruins.

You can then avoid the Antlion's next attack, which involves it creating waves of damaging sand, followed by a dangerous forward lunge. After enough attacks, the beast will be stunned and left open for receiving damage. To stun it quickly, stand on one of the ruins. When the Antlion lunges forward, it will hit the pillar, stunning it.

After it regains consciousness, it rises out of the sand completely, surrounding itself with a protective whirlwind. It then drops cube-shaped bombs, which can be knocked back at the boss to deal damage. The best time to launch the bombs back at it is when it glows red, as it explodes when it hits the Antlion. Be careful, as they may explode if this isn't done quickly enough. If you hit it at least three times with the exploding boxes, it may retreat back to swimming in the sand or it may just fall into the sand. The process of the battle then repeats.

Also beware that the bombs it drops bounces, creating extra damage. Try to block it if you can, then lock-on to the Antlion, position yourself behind the blocks, and launch them at it. Once it sustains enough damage from the blocks, it stops its whirlwind shield and is stunned. Use this time to Air Slide to it and launch Blizzard spells or attack its head. Afterwards, it recovers and recreates its whirlwind shield and continues launching bombs and beams.

Whenever a purple orb surrounds Antlion's head, Air Slide or Dodge Roll to the left or the right to avoid the beam that it shoots at you. Beware that the head continues to spin towards you while it charges for the beam, so don't stop moving. It is also a good idea to lock on to it.

Should you hit low HP, do not hesitate to use the Limit Break. Try to time your Limit Break during the period that it stops its Aero shield. Heal periodically, and the Antlion should fall rather quickly. 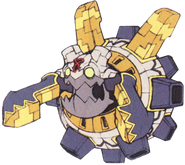 In the Final Fantasy series, an Antlion is a type of subterranean monster based on the insect of the same name. A real-world antlion's larval state is very similar to the Antlion Heartless.