View source
watch 02:46
The Quarry - The Loop
Do you like this video?
Play Sound
Cleanup required
This article may need to be rewritten to conform to a higher standard of style, verification, or use of media. 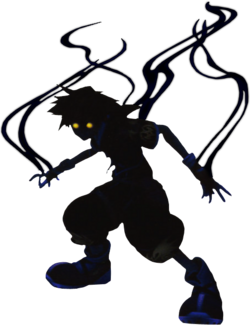 Anti Form (アンチフォーム, Anchi Fōmu?) is a Drive Form which appears in Kingdom Hearts II, Kingdom Hearts II Final Mix and Kingdom Hearts III. It uses both party members, and consumes all of Sora's Drive Bars. It represents the darkness that still dwells within Sora's heart,[1] and is obtained along with Sora's new clothes at Mysterious Tower.

Unlike other Drive Forms, Anti Form cannot be purposefully activated. Instead, it will be randomly activated when Sora attempts to enter Valor, Wisdom, Limit or Master form based on a hidden "Anti Point" counter. This counter is increased by 1 every time Valor, Wisdom, Master, or Limit Form is activated, but is reduced by 10 when Final Form is used, and resets to 0 when a new form is acquired. Gameplay-wise, the Anti Form exists as a consequence of over-using the Drive system, and is meant to be "strong but troublesome".[2]

However, the counter system is ignored while the Two Become One Keyblade is equipped, as its Light & Dark ability will make it so only Anti Form or Final Form activate when Form is used. Anti Form starts at having a 75% chance of being the activated form when Form is used in this state, but goes down to 50% and then 0%, until Final Form is obtained. When Final Form is obtained, that Keyblade will only be useful for being the closest way to activate Anti Form willingly.

Anti Form can only be manually deactivated outside of battle, though its Drive Gauge caps out at 6, and obtaining Drive Orbs will actually cause the gauge to be consumed faster. In addition, though Drive Forms normally persist through cutscenes and Cup seeds, Anti Form will instead revert back to Standard Form. Anti Form is also unique among Forms in that while it possesses the "Anti-Glide" Growth ability, it cannot be leveled due to the fact that experience cannot be gained and is thus inaccessible in Standard Form. Like Valor Form, Anti Form cannot use magic. It is also not possible to use items, nor is it possible to pick up HP prizes while in Anti Form, meaning he is unable to heal. In addition, he takes halved damage from attacks and cannot gain experience from defeated enemies.

However, despite this, it is still possible to make good use of Anti Form with great patience and skill. Due to Anti Form's great speed and agility, Sora can use it to his advantage to easily dodge the attacks of enemies and he can then use "Anti-Glide" to quickly hone back on an enemy and open room for attacks. While his physical strikes may be weak, their high-speed can keep even smaller boss-level enemies incapacitated and even juggled for an extended period of time without worrying any retaliation, making it quite possible to deal severe damage as long as Sora keeps attacking in this form. Just about all of Anti Form's moves have lots of parry frames and allow escape should a long attack be interrupted.

As Anti Form's attacks are not physical, but a mix between Neutral (much like Reflect) and Dark element, it is therefore able to normally damage enemies with resistance/immunity to physical/weapon blows (such as the fronts of Large Bodies and Fat Bandits), making it more useful than the other forms when it comes to dealing with them.

Anti Form is strongly reminiscent of the AntiSora Heartless from Kingdom Hearts, and Nomura has confirmed in an interview with Famitsu that Sora's ability to enter this form is due to his transformation into a Shadow.[2]

Specifically, though, Sora's Anti Form has more feral behavior in which it runs about on all fours, and instead of using the Keyblade in this form, Sora attacks with claws on his hands. When hanging from a ledge, Sora will hang upside down from his foot, in a manner that reflects Anti Form's feral nature. Aesthetically, Sora's skin and hair become ink black, his eyes glow yellow like a Heartless, and his clothes become black with blue and gray accents. Furthermore, he constantly emits Darkness from his arms and back in the form of misty black and violet wisps. In addition to this, his feral appearance and method of attacking largely resembles a Neoshadow in height and methods of using claws as opposed to fists or a Keyblade. Both sport blue accents visibly seen on their bodies as Sora has dark blue accents on his clothes just as the Neoshadow has dark blue veins on it's body.

Although Anti Form's short attack range augmented by his speed makes it quite well-prepared for melee combat, it is important for the enemy to not escape and fly out of range during any combos as the length of Anti Form's attack can leave Sora vulnerable to damage if he is caught in the middle of attacking, as there is no way to cancel his animations. It is best to avoid larger bosses such as Cerberus, Storm Rider, or Hostile Program since they cannot be staggered and therefore the player must survive until Sora reverts back to normal, at which point they will be able to combat the boss normally. Using Anti Glide when an enemy is attacking can cause Sora to home into the attack and suffer damage so be careful when using Anti Glide.

Not only does Anti Form's Form Gauge drop from attacking enemies, but it will also drop when Drive Orbs are acquired. To Revert faster, it's recommended to obtain as many Drive Orbs as possible from defeated enemies, especially if the Drive Converter ability is equipped. If there is a high probability of turning into Anti Form leading into a scripted/boss fight, the player should also consider removing all of the Form Boost abilities, as their power also extends to Anti Form.

An easy method of ensuring Anti Form does not activate during a boss battle is to simply enter a Drive Form before commencing the fight; regardless of chance and current Anti Points, Sora can never enter Anti Form if he transforms outside of battle. The only drawback to this method is that it will of course raise his Anti Points even more, eventually guaranteeing Anti Form activates the next time a Drive Form is triggered in the middle of battle.