A well-balanced Heartless. Beware as it lashes out with a powerful attack when its HP is low!

Winged Heartless. They fly over their enemies and dive to strike them. Their high endurance and quickness make them tough to beat.

A winged Heartless. It swoops down onto its opponent's head or slams into them when they let their guard down.

The Air Soldier is swift, resilient, and not easy to ground.

Winged Heartless that can strike from midair. Don't let their frantic flying throw you off; be patient and eventually you'll spot your chance to attack.

A Soldier in flight is no cause for fright; just watch for that charging attack and you'll be all right.

When they fly out of walloping range, a blast of magic will do the trick.

The Air Soldier is an Emblem Heartless that is found throughout the Kingdom Hearts series.

A cousin of the Soldier, bearing the same shadowed face and jagged visage, the dark-skinned Air Soldier is kitted out for aerial battle in an modified aviator cap that covers the upper half of the face and boasts a pair of shiny-rimmed goggles; the propeller on the top of the cap presumably assists it in hovering in battle, though its bat-like wings seem to do most of the flying work. The Air Soldier also wears thick black pants with an inverted brown Heartless-symbol silhouette at the knees and bulky brown boots with blue and gold toes. It fights with black elbow-length gloves featuring metal bands at the top and sharp red claws that allow for painful attacks.

The Air Soldier's name highlights its ability to fly, and could also be a reference to soldiers serving the Air Force.

In Kingdom Hearts III, its appearance has changed completely with a gray and golden armor like a Roman soldier, with blue plumage on the helmet, blue feathered wings, red x marks on the visor, which is shaped like birds beak, and the boots are leg guards with talons.

For the majority of the time, the Air Soldier will hover just out of reach, then dashing in to attack the player. Fighting large groups of these enemies can be dangerous because of their high strength and quick attacks. When fighting a single Air Soldier, the player should use magic to stun it, then close the distance with their Keyblade to finish it off.

When fighting large groups, it's a good idea to cast Thunder first off, then finish off the nearest Air Soldier. Cast Thunder again, and repeat. Remember to heal often, as the Air Soldier can defeat you on lower levels without taking your HP into critical beforehand. 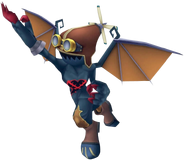 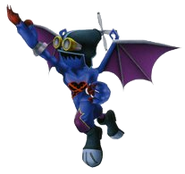