This self pilot trades defense for offense on the fly. Take it down before it gets a chance!

It shoots bullets from midair, but only in a forward direction.
Its movement speed increases when retaliating, so defeat it while it's flying slowly.
Gilled Glider

An Aeroplane is comprised of a grey-skinned creature with a yellow scarf and a jagged mouth and the fighter plane it is piloting. Its legs are seen dangling through the bottom of the plane, showing that it wears brown shoes. The pilot is also wearing a blue hat with black aviator goggles. Its plane is sky blue with a turquoise propeller, a black nose with a few small, silver rivets on it, and conical, yellow guns on each wing. It has two Heartless emblems emblazoned on each side of the plane. Like all Heartless from the Timeless River, it is normally colored in monochrome, and is only seen in color when outside the world.

In Kingdom Hearts II Final Mix, the plane is predominantly dark green, its nose, tail, and guns are light green, and its rivets are yellow. Its propeller is now black with two yellow stripes on the tip of each of its blades. The pilot's skin is now black, its hat white, and its scarf orange.

You can find an Aeroplane in Timeless River, as well as in the Underworld Cups. They are small, old-fashioned airplanes driven by Heartless. They fly around and fire tiny bullets at the player.

In a swarm, they can nail Sora and friends rapid projectiles, which makes destroying them with long-range magic like Blizzard or Thunder easier than physically attacking them. Overall, this enemy is not that hard, and shouldn't be a big threat towards you. 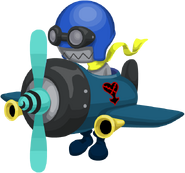