This Heartless often travels in a group. Finish off a swarm quickly with an all-encompassing attack or special attack!

Once the battle begins, there is no fleeing.
It has three types of punches, so figure out which it will unleash and choose an appropriate strategy.
Its tackling punch is powerful, so defeat it quickly with successive reaction commands!
Aerial Champ

An Aerial Knocker is a parrot-like creature with predominantly violet plumage. Its round head, including its beak, is also violet, though the tips of its tail feathers and its neck are orange. Its eyes are large, black and yellow spirals on either side of its head. The Aerial Knocker's wings are yellow and orange and sprout out of the top of its head rather than from its back or sides like real-world birds. Its legs are black and it wears a large, red boxing glove on each one. Its Heartless emblem is on its abdomen.

In Kingdom Hearts II Final Mix, the violet plumage on the Aerial Knocker becomes grey, its neck and the yellow parts of its wings become white, and the orange plumage in its tail and wing feathers become a lighter shade of orange. Its boxing gloves also change to blue.

The Aerial Knocker's name references its flight, as well as its boxing gloves. "Knock" can mean "to impact" or "to strike".

The Aerial Knocker has a bird-like structure, but its wings are on its head, and its main attack is punching. Although the Aerial Knocker is generally weak, it tends to appear in packs, and has many vicious punch combos. 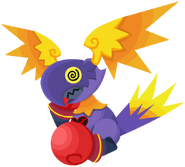