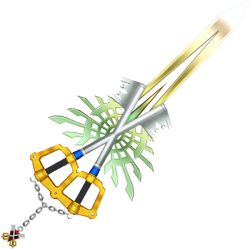 Template:Q The χ-blade (χブレード, Kīburēdo?) is a legendary weapon introduced in Kingdom Hearts Birth by Sleep. While its origins are a mystery, its existence is tied to Kingdom Hearts, serving as both its protector and equal. For this reason, many lusted for the χ-Blade and created the Keyblades so they would use them to find and obtain the weapon. In the resulting Keyblade War that took many lives and destroyed the known world in the process, the χ-Blade was shattered into twenty pieces: seven of light and thirteen of darkness.

Researching the Keyblade War, a Keyblade Master named Master Xehanort learned of the χ-Blade and intended to recreate it to begin a new Keyblade War. Within his reports, Xehanort theorized that the χ-blade could be created when a heart of pure light intersects with an equal yet opposing heart of pure darkness. As a result by pure chance, Xehanort used Ventus as a tool to create the χ-blade as he made his heart into one of pure light and used the extracted darkness to create Vanitas.

Through manipulation, Xehanort ensured that Ventus would arrive to the Keyblade Graveyard, where the χ-Blade was shattered and would be made. At first once Vanitas fused backed into Ventus, the resulting union wielded the χ-Blade and fought Aqua and Mickey Mouse before it was revealed that the weapon was unstable. Despite Vanitas attempting to complete the fusion inside their Dive to the Heart, Ventus defeats him at the cost of his heart while the χ-Blade explodes.

Upon Master Xehanort's return, the villain admits he made a hasty mistake, yet hasn’t given up on his plans to form the χ-Blade and incite another Keyblade War. Revealing to have master-minded a series of events orchestrated by Ansem, Seeker of Darkness and Xemnas, Xehanort plotted to respectively obtain Seven Guardians of Light, formed from either seven Keyblade users or the Princesses of Heart, and Thirteen Darknesses, vessels that hold Xehanort's heart and are extensions of the Keyblade Master himself. While thwarted, Xehanort arranged for his younger self to travel through time and gather his other selves. But short one member, Xehanort and his Organization XIII were forced to return to their timelines.

In the final battle between the 13 Seekers of Darkness and the 7 Guardians of Light, the χ-blade is forged. Master Xehanort uses it to summong Kingdom Hearts and corrupt it with his darkness for the purpose of purging The World and starting it again. However, he temporarily loses the χ-blade when Sora turns Xehanort into a poral and traps him within Scala ad Caelum. After losing a battle on land, sea and sky to Sora, Xehanort calls upon the X-blade again to summon Kingdom Hearts to the soul world. However, it takes some time. Using the X-blade, Xehanort attempts to steal Sora's light and kill him with a powerful blast. However, thanks to his friendship with Donald and Goofy, Sora is able to repel the beam with the strength of their hearts. With the arrival of the other guardians of light, the heart of Eraqus is able to convince Xehanort to give up the X-blade and accept defeat. After Eraqus and Xehanort pass on, Sora and his freinds channel their light into the X-blade, shutting Kingdom Hearts again and returnining them to the Keyblade Graveyard. The X-blade ceases to exist again.

It should be noted that the incomplete χ-blade had the Ultima Weapon coloring to red-orange than bluish-yellow, and the blade was slightly covered with an aura of darkness. It also seems that the incomplete one appeared to have chips in the side of the blade, and it lacked a part of the filigree on one side, and part of the Kingdom Key's hilt, what made it look somehow broken or shattered. The Keychain's two crossed Kingdom Keys are reminiscent of the symbol of the "Keys to the Kingdom of Heaven".

Although it is not seen in this incarnation, it is especially significant that the Kingdom Key had a silver blade and gold hilt, and the Kingdom Key D had a gold blade and silver hilt, matching the keys on the symbol. When the χ-blade hits a target, the released symbols are gold and dark blue stars, symbolic of light and darkness.

The Keychain is a black and red heart that is similar to the Heartless symbol, only without the fleur-de-lis bottom and jagged cross, with two Kingdom Keys crossed over it. The chain starts out as two separate chains that form into one.

The letter "χ" is the letter chi from the Greek alphabet. This is why the name of the weapon is spelled "χ-blade", but can be pronounced "Chi-blade". In both Japanese and English, it is pronounced similarly to "Keyblade", and Master Xehanort explains to Ventus, with a visual demonstration of the ancient letter "χ", that he is not referring to a Keyblade that Keyblade Wielders use. He continues to state that the letter itself carries a meaning of "death" and that it "spells endings".