kiburēdo
The χ-blade (χブレード, Kīburēdo?) is a legendary weapon utilized to unlock and control Kingdom Hearts, coexisting alongside of it as the only means of opening it. It is the inspiration for all human-wrought Keyblades, all of which are imperfectly created after its image.

In legend, it was believed that many fought for possession of the χ-blade in the ancient Keyblade War, though it was ultimately destroyed and shattered into twenty pieces: seven of light, and thirteen of darkness. The legend of the χ-blade soon became the primary interest of Master Xehanort, who sought to incite another Keyblade War in order to reforge the χ-blade and assume control of Kingdom Hearts to balance the light and darkness of the world in equilibrium.

The counterpart of the mighty Kingdom Hearts, the χ-blade exists as its protector and equal counterpart. From studying the χ-blade, the Master of Masters discovered the means of materializing Keyblades, weapons imperfectly modeled after the χ-blade, from the hearts of those worthy enough to wield one.

Due to the Keyblade War, the χ-blade was shattered into twenty pieces: seven of light, and thirteen of darkness, and as a result Kingdom Hearts itself was swallowed into darkness. With the conclusion of the war, people came to believe that the Keyblade wielders participating in the war fought for control of the χ-blade and Kingdom Hearts, while in actuality the conflict was caused by the Foretellers' mistrust of each other, and seeing the destruction brought upon, those who would become masters of their own told the tales to their students but discouraged them from attempting to start another war.

Researching the Keyblade War, a Keyblade Master named Master Xehanort learned of the χ-blade and intended to recreate it to begin a new Keyblade War and use Kingdom Hearts to recreate the worlds with pure light and lead them, seeing how both light and darkness were used amorally. Within his reports, Xehanort theorized that the χ-blade could be created when a heart of pure light intersects with an equal yet opposing heart of pure darkness. Although Xehanort anticipated he could potentially fail in creating the χ-blade, which he had a backup plan for, at the same time he decided to take the easily available option at the moment to fulfill his goals. As a result by pure chance, Xehanort used Ventus as a tool to create the χ-blade as he made his heart into one of pure light and used the extracted darkness to create Vanitas.

Through manipulation, Xehanort ensured that Ventus would arrive to the Keyblade Graveyard, where the χ-blade was shattered and would be made. At first once Vanitas fused backed into Ventus, the resulting union wielded an artificial χ-blade and fought Aqua and Mickey Mouse before it was revealed that the weapon was unstable. Despite Vanitas attempting to complete the fusion inside their Dive to the Heart, Ventus defeats him at the cost of his heart while the artificial χ-blade explodes.

Upon Master Xehanort's return, the villain admits he made a hasty mistake, yet hasn’t given up on his plans to form the χ-blade and incite another Keyblade War. Revealing to have masterminded a series of events orchestrated by Ansem, Seeker of Darkness and Xemnas, Xehanort plotted to respectively obtain Seven Guardians of Light, formed from either seven Keyblade wielders or the Princesses of Heart, and thirteen darknesses in the form of the real Organization XIII, vessels that hold Xehanort's heart and are extensions of the Keyblade Master himself. While thwarted, Xehanort arranged for his younger self to travel through time and gather his other selves. However, the union of light or darkness is not fulfilled in time, and Xehanort and his new Organization are forced to escape.

In the final battle between the thirteen darknesses and the seven lights, the χ-blade is forged. Master Xehanort soon uses it to summon Kingdom Hearts and corrupts it with his darkness for the purpose of purging the world and starting it again.

After being transported to Scala ad Caelum and losing the first battle, Master Xehanort summons the χ-blade during the final battle against Sora, Donald and Goofy atop the world. Despite his use of both the χ-blade and the power of Kingdom Hearts, Xehanort is ultimately defeated by Sora. With the arrival of the other guardians of light shortly afterwards, the heart of Master Eraqus emerges from Terra's heart and is able to convince Xehanort to surrender the χ-blade to Sora and accept defeat. After Eraqus and Xehanort pass on, Sora and his friends channel their light into the χ-blade, shutting Kingdom Hearts again and returning them to the Keyblade Graveyard. It is unknown what became of the χ-blade afterwards.

It should be noted that the incomplete χ-blade had the Ultima Weapon coloring to red-orange than bluish-yellow, and the blade was slightly covered with an aura of darkness. It also seems that the incomplete one appeared to have chips in the side of the blade, and it lacked a part of the filigree on one side, as well as part of one of the Kingdom Key's hilt, making the weapon appear broken and shattered. The Keychain's two crossed Kingdom Keys are reminiscent of the symbol of the "Keys to the Kingdom of Heaven".

Although it is not seen in this incarnation, it is especially significant that the Kingdom Key had a silver blade and gold hilt, and the Kingdom Key D had a gold blade and silver hilt, matching the keys on the symbol. When the χ-blade hits a target, the released symbols are gold and dark blue stars, symbolic of light and darkness.

The Keychain is a black and red heart that is similar to the Heartless symbol, only without the fleur-de-lis bottom and jagged cross, with two Kingdom Keys crossed over it. The chain starts out as two separate chains that form into one.

In Kingdom Hearts III Re Mind, Master Xehanort's data can Formchange the χ-blade into a variety of weapons such as a double-edged sword, claws, shuriken, chakrams, and cannons; a majority of these attacks cannot be blocked.

The letter "χ" is the letter chi from the Greek alphabet. This is why the name of the weapon is spelled "χ-blade", but can be pronounced "Chi-blade". In both Japanese and English, it is pronounced similarly to "Keyblade", and Master Xehanort explains to Ventus, with a visual demonstration of the ancient letter "χ", that he is not referring to a Keyblade that Keyblade wielders use. He continues to state that the letter itself carries a meaning of "death" and that it "spells endings". 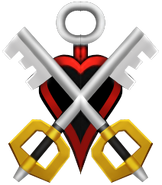 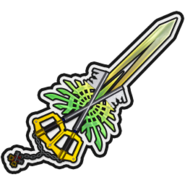